Jo became a NDSD member right after moving to the US from South Africa in beginning of 2015. In South Africa she and her dog Cassia were members of K9 SARA, Western Cape. They started out as a Wilderness Air Scent team but also did some USAR work.

Cassia and Jo passed their FEMA LF certification in 2016 and re-certified in 2019.

In 2017 Jo added Bax to the family. He is Human Remains Detection K9. Like Cassia he is a GSP: Jo’s favorite breed!

In 2020 Rumo got added to the Shorthair gang. He will hopefully take over for Cassia when she goes into her well deserves retirement in a couple of years.

Cassia, born 11/19/12, is a German Shorthaired Pointer. Cassia is handled and owned by Jo Huxel.

Cassia and Jo moved from sunny Cape Town, South Africa to Seattle beginning of 2015. Cassia started her training to be a Search Dog as a 8 week old puppy with K9 SARA, South Africa and became fully operational as a Wilderness Search Dog after she passed her certification with under 2 years. On her very first deployment in South Africa Cassia was able to locate the missing person.

Cassia and Jo could gain some experience working on rubble in South Africa, but only started to train on rubble, wood piles and in buildings regularly in June 2015 when they started with NDSD.

When not searching Cassia goes bike-jöring and hiking and true to her breed she loves retrieving on land and in water.

Cassia and Jo passed their first FEMA CE in hot 106°F in California in September 2016.

They re-certified in April 2019 in very rainy Puyallup, WA.

Cassia is also certified for Wilderness/area searches with IPWDA.

To make sure Cassia’s disaster skills can always be utilized locally when needed Cassia certified with a second handler: Lauren. They passed their NSDA disaster LF certification in April 2019. They can now deploy in case Jo is not available. 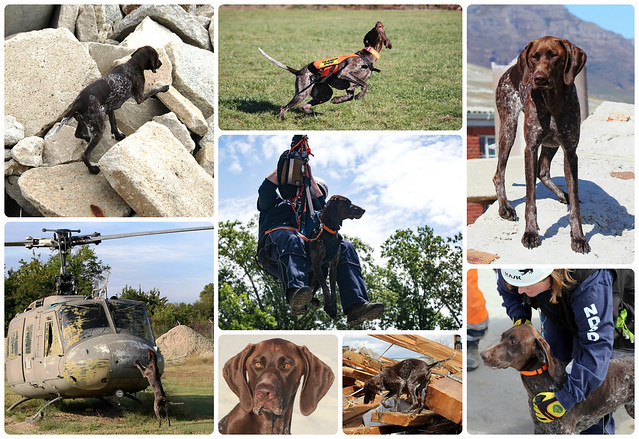 Bax, born 06/17/17 is a German Shorthaired Pointer. Bax trains to be a Human Remains Detection dog. His handler and owner is Jo Huxel.
Bax was bred by a working dog breeder in Germany. He traveled via airplane with Jo to the US as a wee puppy. Immediately after arriving in the US  he started his training with NDSD with just about 8 weeks old.
Bax passed his NSDA Disaster HRD certification in November 2018.
Bax passed his IPWDA HRD Land certification in September 2019.
Bax passed his FEMA CE in Arizona in January 2020.

When not searching Bax loves everything fast! He is crazy about toys and enjoys dock diving, bike- and ski-jöring and hiking. 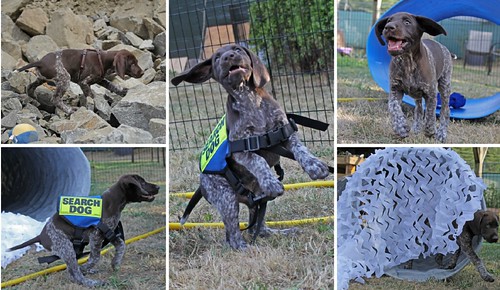 Rumo is a German Shorthaired Pointer. Jo imported him from Germany and he is related to Bax her HRD disaster search dog. Bax and Rumo are uncle and nephew.

Rumo will hopefully step into Cassia’s footsteps and become a LF search and rescue dog and will take over her work when she will retire. 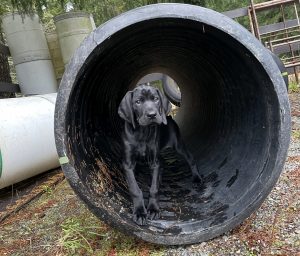