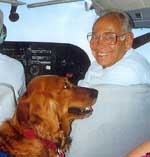 Dick Reininger is a founding member of NDSD. He began search and rescue in 1982 with a local wilderness group, working with Rascal, a Golden Retriever. Dick and Rascal worked the rubble at Ft Steilacoom training site on the first day after its demolition, and Rascal was the first avalanche dog in the area. They were deployed to a search on Mt Hood for missing schoolchildren and to Leninikan, Armenia for an earthquake in 1988. Dick also trained a second search dog, Trippe, in rubble, water and airscent. Dick retired from active participation in 1996.